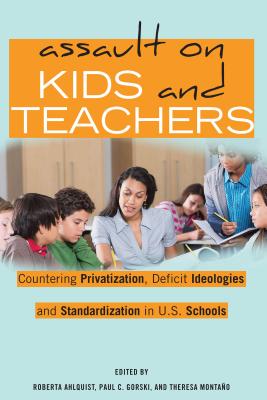 This is book number 523 in the Counterpoints series.

In Assault on Kids and Teachers, educators from across the United States push back against the neoliberal school reform movements that are taking the "public" out of public education, demonizing teachers, and stealing from youth the opportunity for an equitable, just, and holistic education. Contributors, including teachers, educational and community activists, teacher educators, critical education scholars, and others, expose how racism, economic injustice, and other forms of injustice are created and recreated both locally and nationally through educational policies more intent on turning schools into profit centers and undermining teacher unions than on strengthening public schools. Topics include the privatization of public schools, the growing influence of grit ideology on school practices, zero tolerance policies and the school-to-prison pipeline, Teach For America, the lies behind the charter school movement, and the damage TPAs are doing to teacher education. Beyond leveling critiques at these and other troubling trends and practices, though, contributors describe the many sites and forms of resistance emerging in response to these assaults on kids and teachers from students, parents, teachers, and other concerned people. Assault on Kids and Teachers is both a call for deeper understandings of anti-democratic and regressive school reform initiatives and an invitation into movements for putting the "public" back into public education.