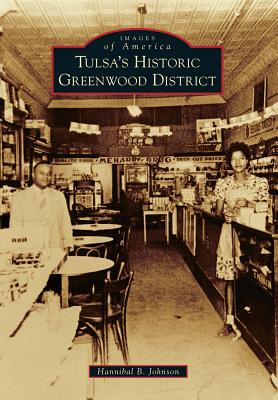 This Negro Wall Street bustled with commercial activity. In 1921, jealously, land lust, and racism swelled in sectors of white Tulsa, and white rioters seized upon what some derogated as Little Africa, leaving death and destruction in their wake. In an astounding resurrection, the community rose from the ashes of what was dubbed the Tulsa Race Riot with renewed vitality and splendor, peaking in the 1940s. In the succeeding decades, changed social and economic conditions sparked a prodigious downward spiral. Today's Greenwood District bears little resemblance to the black business mecca of yore. Instead, it has become part of something larger: an anchor to a rejuvenated arts, entertainment, educational, and cultural hub abutting downtown Tulsa.

The Tulsa experience is, in many ways, emblematic of others throughout the country. Through context-setting text and scores of captioned photographs, Images of America: Tulsa's Historic Greenwood District provides a basic foundation for those interested in the history of Tulsa, its African American community, and race relations in the modern era. Particularly for students, the book can be an entry point into what is a fascinating piece of American history and a gateway to discoveries about race, interpersonal relations, and shared humanity.