Free the Land: The Republic of New Afrika and the Pursuit of a Black Nation-State (Justice) (Paperback) 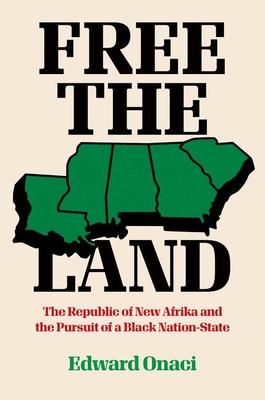 On March 31, 1968, over 500 Black nationalists convened in Detroit to begin the process of securing independence from the United States. Many concluded that Black Americans' best remaining hope for liberation was the creation of a sovereign nation-state, the Republic of New Afrika (RNA). New Afrikan citizens traced boundaries that encompassed a large portion of the South--including South Carolina, Georgia, Alabama, Mississippi, and Louisiana--as part of their demand for reparation. As champions of these goals, they framed their struggle as one that would allow the descendants of enslaved people to choose freely whether they should be citizens of the United States. New Afrikans also argued for financial restitution for the enslavement and subsequent inhumane treatment of Black Americans. The struggle to "Free the Land" remains active to this day.

This book is the first to tell the full history of the RNA and the New Afrikan Independence Movement. Edward Onaci shows how New Afrikans remade their lifestyles and daily activities to create a self-consciously revolutionary culture, and argues that the RNA's tactics and ideology were essential to the evolution of Black political struggles. Onaci expands the story of Black Power politics, shedding new light on the long-term legacies of mid-century Black Nationalism.