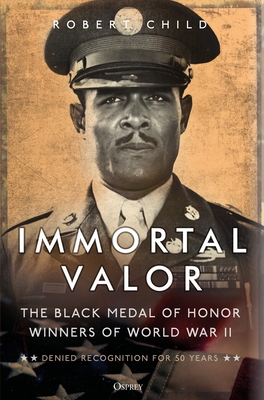 The remarkable story of the seven African American soldiers ultimately awarded the World War II Medal of Honor, and the 50-year campaign to deny them their recognition.

In 1945, when Congress began reviewing the record of the most conspicuous acts of courage by American soldiers during World War II, they recommended awarding the Medal of Honor to 432 recipients. Despite the fact that more than one million African-Americans served, not a single Black soldier received the Medal of Honor. The omission remained on the record for over four decades.

But recent historical investigations have brought to light some of the extraordinary acts of valor performed by black soldiers during the war. Men like Vernon Baker, who single-handedly eliminated three enemy machineguns, an observation post, and a German dugout. Or Sergeant Reuben Rivers, who spearhead his tank unit's advance against fierce German resistance for three days despite being grievously wounded. Meanwhile Lieutenant Charles Thomas led his platoon to capture a strategically vital village on the Siegfried Line in 1944 despite losing half his men and suffering a number of wounds himself.

Ultimately, in 1993 a US Army commission determined that seven men, including Baker, Rivers and Thomas, had been denied the Army's highest award simply due to racial discrimination. In 1997, more than 50 years after the war, President Clinton finally awarded the Medal of Honor to these seven heroes, sadly all but one of them posthumously.

These are their stories.

Robert Child is a military history writer, director, and published author with Penguin/Random House. Besides his co-authored book, The Lost Eleven, with Denise George, he has published nine other nonfiction military history titles and military thrillers over the last eight years. The film rights to The Last Eleven have been acquired. Robert has garnered more than 26 writing and directing awards including an Emmy® nomination and is one of only a handful of writer/directors whose work has screened in the United States Congress. He lives in Atlanta.

“The contributions and sacrifices made by African-Americans during World War II were endless, and many times unheralded unless you served alongside and depended on these courageous men in battle. War does not discriminate, but people do. These seven Medal of Honor recipients rose above that prejudice, and this well-written book shares their incredible stories that the public needs to hear.” —Tim Gray, Founder and President, The World War II Foundation

“This is the only comprehensive narrative written about the African American Medal of Honor recipients of WWII to date. Extremely well written, with very little personal background on some of these men to work with, Child manages to bring each of these heroes' stories to life on a personal level. Child carefully reconstructs each recipient's life prior to his act of valor, demonstrating the character traits that made each an example of integrity, sacrifice and courage. This is a must-read book about seven black soldiers and their bravery at the highest level and the racial injustice that took over four decades to acknowledge. Well done!” —Arthur Collins, President, 5th Platoon, the black World War II education and reenactment group

“Immortal Valor tells the story of America's unsung heroes in a moving and insightful narrative. The research is meticulous and detailed, making each character rise up off the page.” —Martin J. Dugard, New York Times bestselling co-author of 'Killing Patton'

“In Immortal Valor, Robert Child celebrates the lives of seven men whose valor, personal character, and love of country took them above and beyond the call of duty. We learn not just what they did to earn the Medal of Honor--an honor they were denied for far too long--but who they were as human beings, so that their examples can continue to touch us today.” —Edward G. Lengel, Ph.D., Chief Historian, National Medal of Honor Museum

“Immortal Valor tells the story of seven courageous Americans who deeply loved their country at a time when America did not love them back. When it counted most, these men risked their lives in a manner above and beyond the call of duty, proving that patriotism is not defined by skin color, but by a person's willingness to put cause and comrades first. Robert Child's inspiring book conveys a valuable lesson to anyone wishing to understand the full extent of the American character.” —Gregory J.W. Urwin Professor of History Temple University

“Child is able to mould the emotional and military experiences of each soldier in this novel, allowing the prose to flow easily as we are enraptured in tumultuous and heroic battle scenes.” - Aspects of History