Civil Rights in Black and Brown: Histories of Resistance and Struggle in Texas (Paperback) 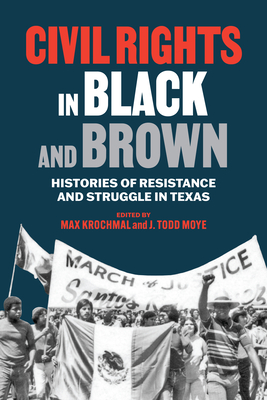 Not one but two civil rights movements flourished in mid-twentieth-century Texas, and they did so in intimate conversation with one another. Far from the gaze of the national media, African American and Mexican American activists combated the twin caste systems of Jim Crow and Juan Crow. These insurgents worked chiefly within their own racial groups, yet they also looked to each other for guidance and, at times, came together in solidarity. The movements sought more than integration and access: they demanded power and justice.

Civil Rights in Black and Brown draws on more than 500 oral history interviews newly collected across Texas, from the Panhandle to the Piney Woods and everywhere in between. The testimonies speak in detail to the structure of racism in small towns and huge metropolises—both the everyday grind of segregation and the haunting acts of racial violence that upheld Texas’s state-sanctioned systems of white supremacy. Through their memories of resistance and revolution, the activists reveal previously undocumented struggles for equity, as well as the links Black and Chicanx organizers forged in their efforts to achieve self-determination.

Max Krochmal is an associate professor of history at Texas Christian University. He is the author of Blue Texas: The Making of a Multiracial Democratic Coalition in the Civil Rights Era.

J. Todd Moye is the Fenton Wayne Robnett Professor of US History and the director of the Oral History Program at the University of North Texas.