A Pledge with Purpose: Black Sororities and Fraternities and the Fight for Equality (Hardcover) 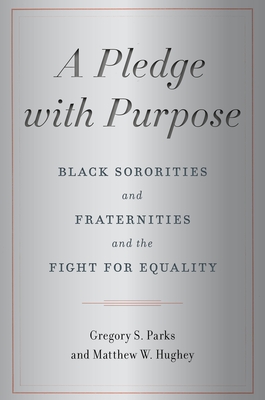 In 1905, Henry Arthur Callis began his studies at Cornell University. Despite their academic pedigrees, Callis and his fellow African American students were ostracized by the majority-white student body, and so in 1906, Callis and some of his peers started the first, intercollegiate Black Greek Letter Organization (BGLO), Alpha Phi Alpha. Since their founding, BGLOs have not only served to solidify bonds among many African American college students, they have also imbued them with a sense of purpose and a commitment to racial uplift-the endeavor to help Black Americans reach socio-economic equality. A Pledge with Purpose explores the arc of these unique, important, and relevant social institutions. Gregory S. Parks and Matthew W. Hughey uncover how BGLOs were shaped by, and labored to transform, the changing social, political, and cultural landscape of Black America from the era of the Harlem Renaissance to the civil rights movement. Alpha Phi Alpha boasts such members as Thurgood Marshall, civil rights lawyer and US Supreme Court Justice, and Dr. Charles Wesley, noted historian and college president. Delta Sigma Theta members include Bethune-Cookman College founder Mary McLeod Bethune and women's rights activist Dorothy Height. Huey P. Newton, co-founder of the Black Panther Party, who left an indelible mark on the civil rights movement, was a member of Phi Beta Sigma, while Dr. Mae Jemison, a celebrated engineer and astronaut, belonged to Alpha Kappa Alpha. Through such individuals, Parks and Hughey demonstrate the ways that BGLO members have long been at the forefront of innovation, activism, and scholarship. In its examination of the history of these important organizations, A Pledge with Purpose serves as a critical reflection of both the collective African American racial struggle and the various strategies of Black Americans in their great-and unfinished-march toward freedom and equality.

Gregory S. Parks is Professor at Wake Forest University School of Law. He is co-author of The Wrongs of the Right: Language, Race, and the Republican Party in the Age of Obama and The Obamas and a (Post) Racial America? Matthew W. Hughey is Associate Professor of Sociology at the University of Connecticut. He is the author of many books, including The White Savior Film: Content, Critics, and Consumption.