The Last Sovereigns: Sitting Bull and the Resistance of the Free Lakotas (Hardcover) 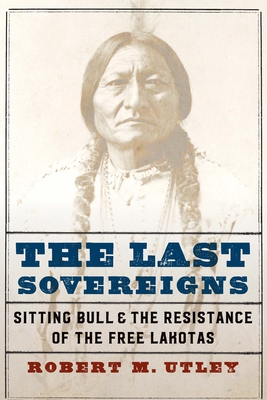 The Last Sovereigns: Sitting Bull and the Resistance of the Free Lakotas (Hardcover)

The Last Sovereigns is the story of how Sioux chief Sitting Bull resisted the white man’s ways as a last best hope for the survival of an indigenous way of life on the Great Plains—a nomadic life based on buffalo and indigenous plants scattered across the Sioux’s historical territories that were sacred to him and his people.

Robert M. Utley explores the final four years of Sitting Bull’s life of freedom, from 1877 to 1881. To escape American vengeance for his assumed role in the annihilation of Gen. George Armstrong Custer’s command at the Little Bighorn, Sitting Bull led his Hunkpapa following into Canada. There he and his people interacted with the North-West Mounted Police, in particular Maj. James M. Walsh. The Mounties welcomed the Lakota and permitted them to remain if they promised to abide by the laws and rules of Queen Victoria, the White Mother. But the Canadian government wanted the Indians to return to their homeland and the police made every effort to persuade them to leave. They were aided by the diminishing herds of buffalo on which the Indians relied for sustenance and by the aggressions of Canadian Native groups that also relied on the buffalo.

Sitting Bull and his people endured hostility, tragedy, heartache, indecision, uncertainty, and starvation and responded with stubborn resistance to the loss of their freedom and way of life. In the end, starvation doomed their sovereignty. This is their story.
Robert M. Utley is a preeminent historian of the West and the author of numerous award-winning books, including The Last Days of the Sioux Nation; Frontiersmen in Blue: The United States Army and the Indian, 1848–1865 (Nebraska, 1981); Custer and the Great Controversy: The Origin and Development of a Legend (Nebraska, 1998); and Billy the Kid: A Short and Violent Life (Bison Books, 1991).

“Mr. Utley is a good stylist and a natural storyteller. . . . The matter of sovereignty raised by Mr. Utley’s subtitle hangs like a cloud over the continuing struggle between Native peoples and energy developers over the Dakota Access Pipeline, which passes under the Missouri River not far upstream from Sitting Bull’s final resting place.”—Andrew R. Graybill, Wall Street Journal

"This is a well-informed study of a decisive moment for 'the last free Lakotas.'"—Publishers Weekly

"The Last Sovereigns is bound to be the standard source on this period of Sitting Bull's life for years to come."—David C. Beyreis, Annals of Wyoming

"This is a hopeful book, one that finds gentleness, truthtelling, and deep humanity in a tragic story. It should find a wide audience and add to the rich legacy of Robert Utley's many contributions to western history."—Tim Lehman, Annals of Iowa

"[The Last Sovereigns is] fascinating in its detail and its insightful discussion of the issues involved. It brings to life an amazingly complex story that is very little known."—Dennis Hagen, Denver Westerners Roundup

“In The Last Sovereigns the greatest biographer of the greatest Lakota leader delivers a superb account of Sitting Bull’s last years, centering on his exile in Canada. It is both a deeply human story of Sitting Bull’s friendship with a Canadian Mountie and an insightful history that puts Native resistance to conquest in an international context. A splendid read and a necessary book.”—T. J. Stiles, author of the Pulitzer Prize–winning Custer’s Trials: A Life on the Frontier of a New America

“Robert Utley’s epic The Last Sovereigns is the heroic and heartbreaking saga of Sitting Bull’s desperate flight into Canada before his death in 1890. The backstory of how Maj. James Morrow Walsh of the North-West Mounted Police befriended the Lakota resistance leader is brilliantly rendered. Like all of Utley’s books, this is essential reading for anyone interested in the American West and Native American History. Highly recommended!”—Douglas Brinkley, Katherine Tsanoff Brown Professor in Humanities and professor of history at Rice University and author of Wilderness Warrior: Theodore Roosevelt and the Land of America

“With twenty-two acclaimed books over the last fifty-eight years, Robert M. Utley has established a reputation as the Dean of Western History. The Last Sovereigns adds luster to that well-deserved title: a masterful tale of cross-border intrigue and heroic resistance as Sitting Bull attempts to establish a new life for his people north of the ‘medicine line’ separating the United States from Canada. Utley’s fast-paced narrative, sharply delineated characters, and graceful prose make this a book that will appeal to all readers.”—Paul Andrew Hutton, Distinguished Professor of History at the University of New Mexico and author of The Apache Wars