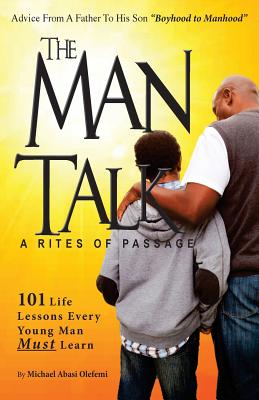 This book can literally save your son's life. 'Back in the day' as a young man growing up in Chicago. When we reached the ages of 13 through 16 years old our mothers would go to the men in our neighborhood (husbands, boyfriends, uncles or men-friends) and ask them to give us 'The Man Talk'. They would tell the men that we had started 'smelling ourselves' (that's the 'Old School' way of saying, "Thinking that we were grown"). 'The Man Talk' consisted of the 'Life Lessons' that these men would share with us to positively guide us into manhood. Lessons that had been passed down from their fathers and grandfathers. A "Rites of Passage" if you will. These lessons I now share with other young men. Today's youth have missed this gravely important step in their life cycles. Blame it on the Hip Hop Culture. Blame it on fathers not being in the home. Blame it on mothers. Blame it on drugs. Blame it on gangs. Blame it on schools. Blame it on an unjust system. Blame it on the police. It doesn't matter. Our young boys of color are dying in the streets. Whether shot down by a bullet from the gun of a cop that doesn't value the lives of black boys. Or a young gansta' that doesn't value the life of black boys. Dead is dead. If you are the parent or guardian of a young male teen (especially young black males) that's influenced by urban culture, I highly recommend this book to help guide him through the trials and tribulations of transitioning from 'boyhood to manhood'. This book will do the one thing that parents and guardians want most of all...bring their sons home alive. This I can promise. This I can just about guarantee. I'm living proof of it.

Born in 1958 and raised in Chicago, Illinois during the time of the Black Panther Party Movement. A time of self awareness, self pride and self determination. I've learned that if you want to survive as a black male then you can't be stupid. You can't keep making stupid choices. The odds were already stacked against me, so couldn't keep doing things that made it even more difficult to survive. I know about and have experience all the things young black boys are experiencing today (gangs, drugs, thugs, pimps, hustlers, violence, death, poverty, an absent father etc.). In the streets we call it "game recognize game". But I choose not to be defined by where I was, but be defined by what I wanted to become. To be honest I didn't understand the notion of "others" being better than me. I found out early that failure was easy (since most people already believed that young black boys would fail)...but success takes courage. Its easy to be a thug, go to jail, be a drug addict, make babies ect. But being a college graduate, staying free, having self discipline, being a father...that's hard. So I went to college, stayed out of gangs, jail and off drugs and didn't have babies all over the place. Not because I couldn't, but because I didn't want to.Ultimately I ended up teaching in public schools for over thirty years in Compton, South LA and Inglewood. As a teacher, I have met and helped some of the most notorious young men you could imagine. And if they made...so can others. I now create books, programs and resources to help keep black boys (and boys of color) stay alive, educated and free. We don't need anymore Trayvon Martins' or. I am Michael Browns'. We don't need to lose anymore black boys before their time. I am a black man who was once a black boy. I survived and thrived...and so can they.