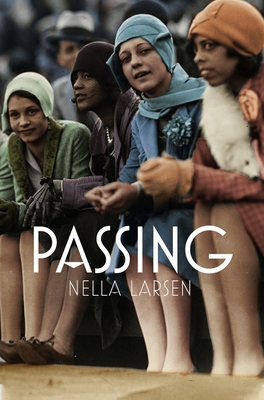 Irene Redfield, married to a successful physician, enjoys a comfortable life in Harlem, New York. Reluctantly, she renews her friendship with old school friend, Clare Kendry. Clare, who like Irene is light skinned, ‘passes’ as white and is married to a racist white man who has no idea about Clare’s racial heritage. Even though Irene knows that reigniting her friendship with Clare will lead to trouble, she can’t resist allowing Irene into her world. Irene in turn wants to rekindle her bonds with the African American community of her youth. As tensions mount between friends and between couples, this taut and mesmerizing narrative spins towards an unexpected end.

This edition of Passing features an introduction by writer and academic, Christa Holm Vogelius.

Nella Larsen was born in Chicago in 1891 to a white Danish mother and a black West Indian father. She studied in America and Denmark and throughout her writing career she worked as a children’s librarian and primarily as a nurse. In 1928 her first novel Quicksand was published to great critical acclaim. Passing was published a year later. Her marriage brought her into contact with the upper echelons of New York’s black society and she became an important female voice of the Harlem Renaissance. She was the first black woman to receive a Guggenheim Fellowship for creative writing. Divorced in 1933, she spent the rest of her life working as nurse. Nella Larsen died in 1964.

A fascinating inquiry into the nature of race (and a window into the Harlem Renaissance) catalyzed by a chance meeting between two childhood friends. A page-turning classic. -- Jennifer Egan

A tragic story rooted in inescapable facts of American life . . . Passing is the work of a highly talented and thoughtful writer -- Richard Bernstein ― The New York Times

A short, easy, engaging read . . . as much as it is a revealing cultural study of the 1920s, is also incredibly relevant today. -- Lexi Nisita ― Refinery 29

Much-loved and much-studied . . . The dynamic between the pair [Irene and Clare] is dramatically limitless, an awkward, complex friendship between two women of colour both trying to survive at a time when their country is against them. -- Benjamin Lee ― Guardian

Perhaps as much as anything, Passing is about victimhood, and the twisted way we sometimes claim to be the injured party to avoid the unsavory truth that some hurt is self-inflicted. -- Jessica Kiang ― Variety

Passing asks who is allowed in certain spaces (and who is the gatekeeper of those spaces), and what happens when people are ejected from them, either by their own free will or an outside force . . . Larsen never set out to deliver answers; just rich, searching stories rounded in real experience. -- Kate Erbland ― IndieWire

I was astounded by how haunted I was by Nella Larsen’s words and world, I truly couldn’t shake either. -- Tessa Thompson ― Los Angeles Times