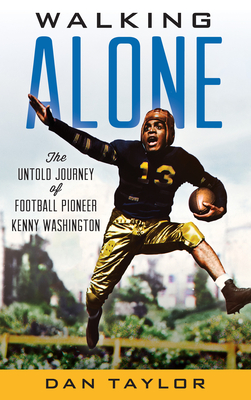 
Usually Ships in 1-5 Days
The inspirational story of African American trailblazer Kenny Washington, the first player to reintegrate the NFL. On September 29, 1946, football star Kenny Washington made history. When he trotted onto the field for the Los Angeles Rams, Washington broke the color barrier in the NFL. In Walking Alone: The Untold Journey of Football Pioneer Kenny Washington, Dan Taylor reveals Washington's immeasurable impact on his sport and beyond. Legends of the game hailed Washington as one of the greatest players in football history. He was also a baseball star, and Taylor recounts never-before-told details of the efforts to make Washington the first Black player in big league baseball along with Jackie Robinson. Taylor also delves into the heinous verbal and physical abuse Washington was subjected to, his refusal to play in the South, and how he positively impacted ignorant teammates and rivals through his character and talent. Throughout the 1930s and 1940s, there was no more popular athlete in Los Angeles than Kenny Washington. Walking Alone chronicles for the first time the life story of this trailblazing football legend.
Dan Taylor is a former award-winning television sportscaster. He is the author of Fate's Take-Out Slide in collaboration with George Genovese, A Scout's Report: My 70-Years in Baseball, Rise of the Bulldogs, and Lights, Camera, Fastball: How the Hollywood Stars Changed Baseball. Taylor is involved with the television broadcast team for the Fresno Grizzlies of the Pacific Coast League and is a member of the Society for American Baseball Research and the Pacific Coast League Historical Society. He resides in Fresno, California.