Running Sideways: The Olympic Champion Who Made Track and Field History (Hardcover) 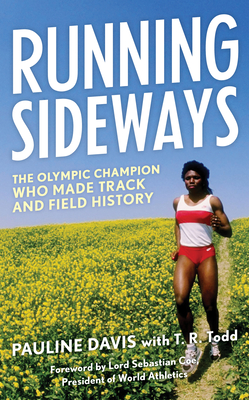 Running Sideways: The Olympic Champion Who Made Track and Field History (Hardcover)


Usually Ships in 1-5 Days
A raw, uplifting story from one of the most important hidden figures in track and field history. When Pauline Davis first began to run, it wasn't with any thought of future Olympic glory. A product of the poor neighborhood of Bain Town in The Bahamas, she carried the family's buckets every day to fetch fresh water--running sideways, sprinting barefoot from bullies, to get the buckets of water home without spilling. But when a seasoned track coach saw Pauline sprinting, he saw the heart of a champion. In Running Sideways, Pauline Davis shares her inspiring story. Born and raised in the ghetto, Pauline fought through poverty, inequality, racism, and political machinations from her own country to beat the odds and become a two-time Olympic gold medalist, the first individual gold medalist in sprinting from the Caribbean, the first Black woman on the World Athletics council, and a central figure in the Russian anti-doping campaign. A casualty herself of the doping plague that hit track and field--she wouldn't be awarded her individual gold medal until Marion Jones was infamously stripped of her medals for doping--Pauline dedicated her years on the World Athletics council to clean sport and fair play. Running Sideways is a book about determination, faith, focus, and an incredible will to succeed. It's about a trailblazer in women's sports, not just in The Bahamas, not just in track and field, but on the global stage.
Pauline Davis is a former Bahamian sprinter who competed in five Olympic Games. After winning silver at the 1996 Summer Olympic Games in Atlanta, she achieved two gold medals in 2000 at Sydney Olympics. In The Bahamas, Pauline is widely known as one of the country's "Golden Girls". Prior to the Olympics, she would shatter collegiate records at the University of Alabama and achieve a gold medal at the World Championships. She was the first Black woman to be selected to the IAAF Council in 2007. To this day, she remains an advisor to the track and field community as an honorary member of this council. She is also a senior official at The Bahamas' Ministry of Youth, Sport and Culture. Davis lives in Nassau, The Bahamas. T. R. Todd is a journalist, biographer and novelist. A former journalist at the Nassau Guardian, Todd's experience with The Bahamas stretches back nearly a decade. He also served as the Associated Press correspondent for the country. Todd is the author of The Man Behind the Bow Tie: Arthur Porter on Business, Politics and Intrigue and the award-winning Pigs of Paradise: The Story of the World-Famous Swimming Pigs. Todd's work has appeared in newspapers across North America, including the New York Times, Huffington Post, Globe and Mail and the Toronto Star. He currently lives in Ottawa, Canada.