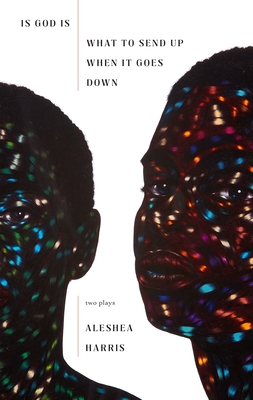 "Furious and incandescent... Harris writes so blisteringly that the actors could just let the language's flames carry them along." --Helen Shaw, Time Out New York on Is God Is

An explosive epic that examines the cyclical nature of violence, Is God Is follows twin sisters who undertake a dangerous journey to exact revenge upon their father at the behest of their dying mother.

"Aleshea Harris turns theater into a monument, ephemeral but real, to ongoing pain. You can't tear down a statue that never shows up outside." --Vinson Cunningham, New Yorker on What to Send Up...

What to Send Up When It Goes Down is a play-pageant-ritual response to anti-Blackness in America. It is a challenge to us all: to heal through expression, expulsion, and movement.

Aleshea Harris'sIs God Is won the Relentless Award and an Obie Award. What to Send UpWhen It Goes Down was published in American Theatre magazine andreceived a special commendation from the Susan Smith Blackburn Prize. Harris's awardsinclude the Windham-Campbell Prize, the Steinberg Playwright Award, theHermitage Greenfield Prize, and The Horton Foote Prize.