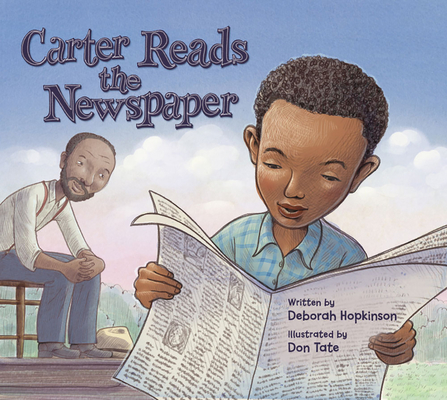 "Carter G. Woodson didn't just read history. He changed it." As the father of Black History Month, he spent his life introducing others to the history of his people.

Carter G. Woodson was born to two formerly enslaved people ten years after the end of the Civil War. Though his father could not read, he believed in being an informed citizen, so Carter read the newspaper to him every day. As a teenager, Carter went to work in the coal mines, and there he met Oliver Jones, who did something important: he asked Carter not only to read to him and the other miners, but also research and find more information on the subjects that interested them.

"My interest in penetrating the past of my people was deepened," Carter wrote. His journey would take him many more years, traveling around the world and transforming the way people thought about history.

From an award-winning team of author Deborah Hopkinson and illustrator Don Tate, this first-ever picture book biography of Carter G. Woodson emphasizes the importance of pursuing curiosity and encouraging a hunger for knowledge of stories and histories that have not been told.

Teacher's Guide available.
Deborah Hopkinson grew up in Lowell, Massachusetts, and received a BA in English from the University of Massachusetts and an MA in Asian Studies from the University of Hawai'i at Manoa. She is the author of more than fifty books for young readers, including picture book and middle grade fiction and nonfiction. She lives in Oregon with her family and a menagerie of pets.

Don Tate grew up in Des Moines, Iowa, where he learned about Black history at the Center for Study and Application of Black Theology. He grew up to become an author and illustrator of numerous award-winning children's books, including It Jes' Happened: When Bill Traylor Started to Draw and Poet: The Remarkable Story of George Moses Horton, both of received Ezra Jack Keats New Writer Honor awards. He lives in Austin, Texas.
"Hopkinson skillfully shapes Carter's childhood, family history and formative experiences into a cohesive story.. . . the inclusion of notable figures from black history reinforces the theme (a key is in the backmatter). An important and inspiring tale well told." —Kirkus Reviews

"Young readers will be caught up in his story. . . . Quotes are seamlessly woven into the narrative, and a time line, list of sources, and bibliography add research appeal. Of special note are the illustrations, which include more than 40 portraits of black leaders. . . Their images and one-line biographies will pique further interest, making this a valuable resource for school and public libraries." —Booklist

"Exemplary. . . This inspiring picture book combines a rich but focused text with clear, expressive mixed-media illustrations. It sheds light on an important, inspiring, but little-known subject, and the supplemental back matter gives weight to the exceedingly important takeaways that history must include all people, and that anyone can change history." —Shelf Awareness