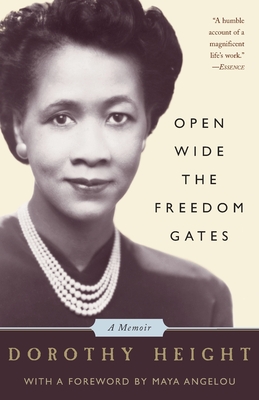 
Usually Ships in 1-5 Days
Dorothy Height marched at civil rights rallies, sat through tense White House meetings, and witnessed every major victory in the struggle for racial equality. Yet as the sole woman among powerful, charismatic men, someone whose personal ambition was secondary to her passion for her cause, she has received little mainstream recognition -- until now. In her memoir, Dr. Height, now ninety-one, reflects on a life of service and leadership. We witness her childhood encounters with racism and the thrill of New York college life during the Harlem Renaissance. We see her protest against lynchings. We sit with her onstage as Martin Luther King Jr. delivers his "I Have a Dream" speech. We meet people she knew intimately throughout the decades: W.E.B. DuBois, Marcus Garvey, Eleanor Roosevelt, Mary McLeod Bethune, Adam Clayton Powell Sr., Langston Hughes, and many others. And we watch as she leads the National Council of Negro Women for forty-one years, her diplomatic counsel sought by U.S. Presidents from Eisenhower to Clinton.

After the fierce battles of the 1960s, Dr. Height concentrates on troubled black communities, on issues like rural poverty, teen pregnancy and black family values. In 1994, her efforts are officially recognized. Along with Rosa Parks, she receives the Presidential Medal of Freedom, the nation's highest civilian honor.
Dr. Dorothy Height has more than twenty honorary degrees. In addition to the Presidential Medal of Freedom, she has received the Franklin Delano Roosevelt Freedom Medal and the Citizens Medal Award, which President Ronald Reagan awarded her in 1989. Now ninety-one, she continues to serve as chair and president emerita of the National Council of Negro Women. She lives in Washington, D.C.