Legacy: Book Two of the Chronicles of the Nubian Underworld (Paperback) 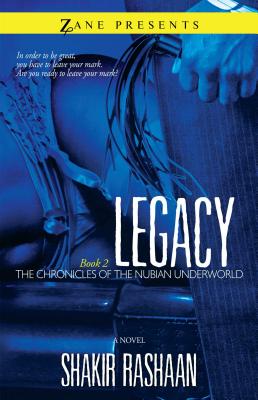 Legacy: Book Two of the Chronicles of the Nubian Underworld (Paperback)


Special Order
A tale unlike anything else, this second episode in the chronicles of the Nubian Underworld series continues the erotically charged journey inside Atlanta’s African American Fetish/BDSM community.

After returning from Dubai, a power shift occurs within the Atlanta Fetish community as the “torch” is passed on from Amenhotep to Ramesses and Neferterri. The Palace is being transformed in Ramesses’s image, and the new “power couple” is adjusting to life in the spotlight and the benefits (and headaches) that come with it.

But as Ramesses puts the finishing touches on establishing the balance of power, Amenhotep has tasked him with a daunting task—one that will test his will and re-forge a bond that was once broken, cementing his legacy within the sacred “society.”

Exotic, decadent, and written by a true insider, Legacy takes you deeper into the Atlanta Fetish/BDSM community, twisting more surprises and revelations that are sure to take your breath away.
Shakir Rashaan is the author of the bestselling Nubian Underworld series, as well as the Kink, P.I. series (Obsession, Deception, and Reckoning) and several anthology credits, including Zane Presents Z-Rated: Chocolate Flava 3. He currently resides in suburban Atlanta with his wife and two children. You can see more of Rashaan at ShakirRashaan.com.