Heroes of an Unknown World (Paperback) 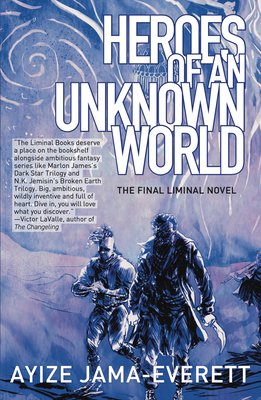 Heroes of an Unknown World (Paperback)


Unavailable
Not Yet Published

In the final novel of the Liminals, a found family of Black superheroes has one last chance to save the world.

After traveling back in time to rescue his fostered daughter, Taggert has returned to the present and found himself in his favorite place: up against the wall. But the world they've returned to is not the one they left: everything is slightly grayer, the music is boring, joy is just out of reach. The liminals' entropic enemies, the Alters, are trying to bring about the end of the world by sucking the life--literally--out of enough people to tip the balance their way.

Traveling from Jamaica to London to Indonesia to the heart of the whirlwind in the desert at the heart of all deserts, Taggert and his found family of liminals and supporters have to find a way to bring back the joy before they're all ground down into the gray dust.

Ayize Jama-Everett calls the Bay Area his home despite being born in New York City. He holds a Masters degrees in Divinity, Clinical Psychology, in Fine Arts, Creative Writing. He has worked as a bartender, a translator, a drug and alcohol counselor, a stand-up comedian, a script doctor, a ghostwriter, a high school dean, a college professor, and for a brief time, a distiller of spirits. Jama-Everett's Liminal series began with The Liminal People and continued with The Liminal War and The Entropy of Bones. He has also written a graphic novel, Box of Bones with two-time Eisner Award winner John Jennings and has written for The Believer and the LA Review of Books, among others.