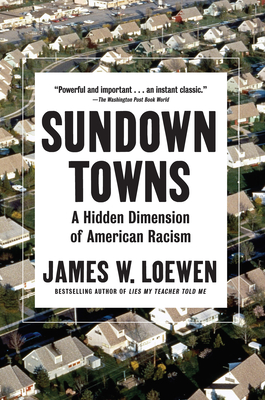 By James W. Loewen
List Price: $19.99
Our Price: $16.99
(Save: $3.00 15%)
Usually Ships in 1-5 Days
Powerful and important . . . an instant classic.
--The Washington Post Book World The award-winning look at an ugly aspect of American racism by the bestselling author of Lies My Teacher Told Me, reissued with a new preface by the author

In this groundbreaking work, sociologist James W. Loewen, author of the classic bestseller Lies My Teacher Told Me, brings to light decades of hidden racial exclusion in America. In a provocative, sweeping analysis of American residential patterns, Loewen uncovers the thousands of sundown towns--almost exclusively white towns where it was an unspoken rule that blacks weren't welcome--that cropped up throughout the twentieth century, most of them located outside of the South.

In a new preface, Loewen puts this history in the context of current controversies around white supremacy and the Black Lives Matter movement. He revisits sundown towns and finds the number way down, but with notable exceptions in exclusive all-white suburbs such as Kenilworth, Illinois, which as of 2010 had not a single black household. And, although many former sundown towns are now integrated, they often face second-generation sundown town issues, such as in Ferguson, Missouri, a former sundown town that is now majority black, but with a majority-white police force.

James W. Loewen has won the American Book Award, the Oliver Cromwell Cox Award for Distinguished Anti-Racist Scholarship, the Spirit of America Award from the National Council for the Social Studies, and the Gustavus Myers Outstanding Book Award. He is professor emeritus of sociology at the University of Vermont and lives in Washington, DC.