All Eyes Are Upon Us: Race and Politics from Boston to Brooklyn (Paperback) 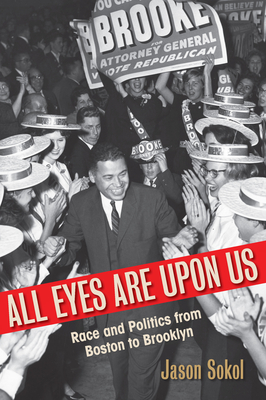 All Eyes Are Upon Us: Race and Politics from Boston to Brooklyn (Paperback)


Special Order
All Eyes Are Upon Us explores the history of racial struggles in Massachusetts, Connecticut, and New York from World War II to the present.

The Northeast has long basked in its reputation as the home of abolitionism and a refuge for blacks fleeing the Jim Crow South. But its cities have also stood as strongholds of segregation and racism. At times, this region witnessed bold experiments in interracial democracy: the schools of Springfield, Massachusetts, attempted to abolish racial and religious prejudice; white fans in Brooklyn embraced Jackie Robinson; voters repeatedly supported black candidates, including Senator Edward Brooke in Massachusetts and Congresswoman Shirley Chisholm in Brooklyn.

Yet during these same moments, an opposing narrative unfolded—one highlighted by worsening black poverty, hardening patterns of segregation, and exploding incidents of racial violence. All Eyes Are Upon Us probes the conflict between these two warring traditions.
Jason Sokol is associate professor of history at University of New Hampshire and author of There Goes My Everything: White Southerners in the Age of Civil Rights. http://www.jasonsokol.com
"This groundbreaking history shows a civil rights movement beyond Birmingham, Selma, and Memphis. An important new voice in twentieth-century history, Sokol expands the civil rights story to include segregated schools and racial politics in the Northeast."—Daily Beast

"Carefully balancing an appreciation of the symbolism of interracial politics with recognition of the forces that remain untouched by it, All Eyes Are Upon Us reminds us—if we need reminding—that the events unfolding in Ferguson, Mo., Staten Island, and too many other communities are embedded in a complex and problematic history of both racial advances and obstacles to progress."—Washington Post

"All Eyes Are Upon Us is a prescient book. . . . Ambitious, engrossing, analytically lucid. . . . It is certainly possible that when this decade ends it will have confirmed the relevance of W. E. B. Du Bois's grim prophecy about America's everlasting racism. Jason Sokol's exceptional All Eyes Are Upon Us prepares us for just such a possibility."—David Levering Lewis, New York Times Book Review

"You will certainly come away with a better understanding of the continuum of racial discomfort that defines American society as it lurches between multi-racial progress and disturbing disappointment."—Kansas City Star

"All Eyes Are Upon Us succeeds in excavating unfamiliar insights."—Boston Globe

"All Eyes Are Upon Us offers equally fascinating portraits of several successful black politicians . . . a refreshing departure from recent histories of iconic American figures and epic events aimed for the best-seller lists. He also allows the perceptions of many participants in this history, major and minor, to shape and deepen his own."—History News Network

"With sharp research and insights, Sokol follows this blithe and self-congratulatory legacy through the election of President Barack Obama."—Kirkus