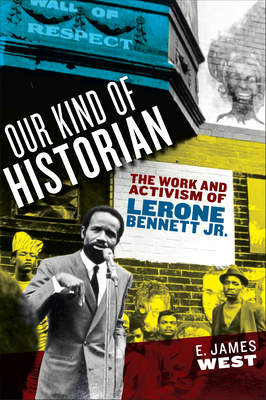 Journalist, activist, popular historian, and public intellectual, Lerone Bennett Jr. left an indelible mark on twentieth-century American history and culture. Rooted in his role as senior editor of Ebony magazine, but stretching far beyond the boundaries of the Johnson Publishing headquarters in Chicago, Bennett’s work and activism positioned him as a prominent advocate for Black America and a scholar whose writing reached an unparalleled number of African American readers.

This critical biography—the first in-depth study of Bennett’s life—travels with him from his childhood experiences in Jim Crow Mississippi and his time at Morehouse College in Atlanta to his later participation in a dizzying range of Black intellectual and activist endeavors. Drawing extensively on Bennett’s previously inaccessible archival collections at Emory University and Chicago State, as well as interviews with close relatives, colleagues, and confidantes, Our Kind of Historian celebrates his enormous influence within and unique connection to African American communities across more than half a century of struggle.

E. JAMES WEST is lecturer of U.S. history at the University of York and author of A House for the Struggle: The Black Press and the Built Environment in Chicago.

“This biography provides the first detailed account of the life, work, and contributions of Bennett. West considers Bennett’s life within various historical contexts, from his early years through the dawning of the twenty-first century. A ‘page-turner’ written in an accessible style, OurKind of Historian is a noteworthy contribution to the Black biographical tradition, African American studies, and journalism history.”—Pero Gaglo Dagbovie, author of The Early Black History Movement, Carter G. Woodson, and Lorenzo Johnston Greene

“Our Kind of Historian is an intellectual biography of Bennett that examines his work as a journalist, editor, and public historian, with particular emphasis on his role as progenitor of a new sort of Black public history that successfully reached a mass audience. West persuasively argues that Bennett was a major figure in the Black political and cultural upsurge of the 1960s and 1970s.”—James Smethurst, author of Behold the Land: The Black Arts Movement in the South