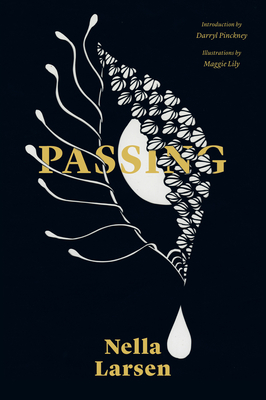 
Usually Ships in 1-5 Days
Restless Classics presents the ninetieth anniversary edition of an undersung gem of the Harlem Renaissance: Nella Larsen's Passing, a captivating and prescient exploration of identity, sexuality, self-invention, class, and race set amidst the pealing boisterousness of the Jazz Age.

When childhood friends Irene Redfield and Clare Kendry cross paths at a whites-only restaurant, it’s been decades since they last met. Married to a bigoted white man who has no idea that she is African American, Clare has fully embraced her ability to “pass” as a white woman. Irene, also light-skinned and living in Harlem, is shocked by Clare’s rejection of her heritage, though she too passes when it suits her needs. This encounter sparks an intense relationship between the two women who, as acclaimed critic and novelist Darryl Pinckney writes in his insightful introduction, reflect Larsen’s own experience of being “between black and white, and culturally at home nowhere.”

In a culture intent on setting boundaries, Clare and Irene refuse to adhere to expectations of gender, race, or class, culminating in a tragic clash of identities, as their relationship swings between emotional hostility and intense attraction.
Nella Larsen was born Nellie Walker in 1891 in Chicago. Her mother was a Danish immigrant and her father an immigrant from the Danish West Indies. Larsen attended school in all white environments in Chicago until she moved to Nashville to attend high school. Larsen later practiced nursing, and from 1922 to 1926, served as a librarian at the New York Public Library. After resigning from this position, Larsen began her literary career by writing her first novel, Quicksand (1928), which won her the Harmon Foundation’s bronze medal. After the publication of her second novel, Passing (1929), Larsen was awarded the first Guggenheim Fellowship given to an African American woman, establishing her as a premier novelist of the Harlem Renaissance. Nella Larsen died in New York in 1964.

Maggie Lily is a graduate of the University of the Arts where she studied creative writing. She currently works in Philadelphia as a talent agent for the Barnes Foundation, one of the leading art museums in the U.S., and as a freelance writer, illustrator and curator. Maggie has been a featured guest artist/performer at the NYC Poetry Festival and has shared her poetry and Active Imagination workshops with numerous galleries and venues around Philadelphia, including the Kitchen Table Gallery, Berks Warehouse, Icebox Project Space and The Common Room.

Darryl Pinckney, a longtime contributor to The New York Review of Books, is the author of a novel, High Cotton, and two works of nonfiction, Blackballed: The Black Vote and US Democracy and Out There: Mavericks of Black Literature. He has also collaborated with Robert Wilson on theater projects, most recently an adaption of Daniil Kharm’s The Old Woman. He lives in New York.
“Nella Larsen’s Passing is one of those American classics that I’ve always meant to get around to. A new edition is out today from Restless Books, with a handsome cover (and interior illustrations, all by Maggie Lily) and an introduction by the novelist and critic Darryl Pinckney. If I’m going to tackle a classic, I like to have a teacher to help me along the way…. It’s a remarkable book, and Maggie Lily’s dark illustrations end up feeling very appropriate.”
— Rumaan Alam

"Quicksand and Passing are novels I will never forget. They open up a whole world of experience and struggle that seemed to me, when I first read them years ago, absolutely absorbing, fascinating, and indispensable."
— Alice Walker

"Discovering Nella Larsen is like finding lost money with no name on it. One can enjoy it with delight and share it without guilt."
— Maya Angelou

“Nella Larsen didn’t just eschew tribes — she never had one to begin with…. Unsparing on the madness of racial classification but frank, and very beautiful, on the lure of racial belonging.”
— Parul Sehgal

“[Passing] is about changing definitions of concepts like race and gender, and the inextricable relationship between whiteness and blackness. It is a meditation on the uneasy dynamic between social obligation and personal freedom. It dramatizes the impossibility of self-invention in a society in which nuance and ambiguity are considered fatal threats to the social order.”
— Emily Bernard

“I have read and re-read Passing more than a dozen times. Each time I think I can hear Larsen's own voice more clearly: asking, demanding really, that each of us abandon the labels we've been assigned and celebrate the story that we are.”
— Heidi W. Durrow

“Passing broke literary ground as the story of two racially and sexually ambiguous women written by another. Social boundaries can be permeated, but not without cost."
— Natalie Cate