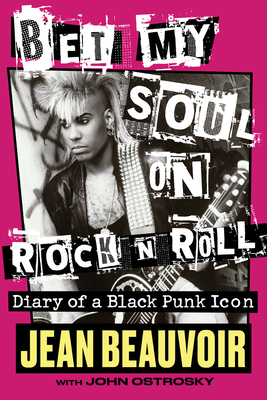 By Jean Beauvoir, John Ostrosky (With), Kermit Blackwood (Foreword by)
List Price: $27.99
Our Price: $23.79
(Save: $4.20 15%)
Usually Ships in 1-5 Days
The life and career of Haitian American musician Jean Beauvoir, a member of the legendary New York City punk band the Plasmatics

Jean Beauvoir joined the Plasmatics in 1979, playing bass and keyboards for the most notorious band to emerge out of the New York City punk scene. By 1982, he was a member of Little Steven and the Disciples of Soul, a retro-rock revival act headed by Steven Van Zandt. The Disciples of Soul videos played on MTV during the network’s earliest years, making Beauvoir one of the first Black recording artists to cross the start-up music channel’s “color line.”

Beauvoir went on to become a multi-platinum artist, producer, and songwriter. Bet My Soul on Rock 'n' Roll follows his ride through the American music industry, detailing his encounters with rock stars such as Bruce Springsteen, Paul Stanley, Gene Simmons, and Lita Ford, as well as the actor Sylvester Stallone, the billionaire executive Richard Branson, and even Donald Trump. Beauvoir also considers the manner in which his Haitian heritage has shaped his public image, his music, and his role as an activist for the dispossessed and the poor.

Jean Beauvoir is an American singer, multi-instrumentalist, producer, and songwriter of Haitian descent. Guitar World featured him on its list of the fifty “Most Influential Black Rockers” of all time. Beauvoir’s worldwide music catalogue, currently administered by Universal Music Publishing, contains over 600 published titles. As an artist, producer, and songwriter, he has sold in excess of 40 million records. He lives in Bonita Springs, FL. John Ostrosky, the New York Times bestselling coauthor of Ace Frehley's No Regrets, is the cohost of Talking Metal and a Berklee alumnus who has performed with musicians including members of the Ramones and Twisted Sister. Kermit Blackwood is a multifaceted artist who has collaborated with a number of iconic luminaries over the span of his thirty-year career as ghostwriter, scribe, conduit, and careful listener of the stars. Kermit Blackwood is author of the Widow of the Pharaoh anthologies and Station of No Station.
"I have known Jean for 30 years now, and he’s truly one of the coolest guys I know, such a great friend, talented musician and amazing family man and he keeps getting better!" —Marcus Schenkenberg, fashion model, actor, singer, and TV personality

"I’ve been a fan of Jean’s work for decades. From the songs he wrote with Kiss, to the Plasmatics, Crown Of Thorns, his solo work, all great stuff! His solo album Drums Along The Mohawk is a favorite to this day. A tremendous talent, a hell of a nice guy, and if all that wasn’t enough, he found a way to never age!" —Eddie Trunk, author of Essential Hard Rock and Heavy Metal Vol 1 & 2

"Jean's story has got to be one of the broadest arcs in rock n’ roll history.  From touring with Gary US Bonds as a young teen to finding fame and notoriety as the bassist from the Plasmatics, to award winning producer to music biz CEO, to a successful solo career.  Few can boast of such a storied career.  He’s literally seen and done it all.  This book bears witness to all of it!" —Richard Fortus, Guns N' Roses

"From the first time I met Jean he continues to light up a room with positive energy and a kind, generous spirit. We’ve written together, sung together and had some wild times together. In the beginning I had to get used to his being better looking than me but we were actually like black and white twins. We’ve known each other longer than I’d like to admit and his life story is as cool as he is." —Paul Stanley, KISS

"Me, Jean, Grace (Jones) and artists like Ava Cherry traveled in the same circles, we stood out, we were Black, children of the night, dressed for on stage, off stage.  A spiked head, chap wearing ex-Labelle, a drop dead gorgeous black man with a huge Blond Mohawk, an androgynous black club Diva and a David Bowie ‘wild child’ walk into the room and…Jean stood out even in that group!  Writing and collaborating on songs with Jean was a musical adventure, creating strong melodies over power pop-rock, with thumping bass and blazing guitars!" —Nona Hendryx, Labelle