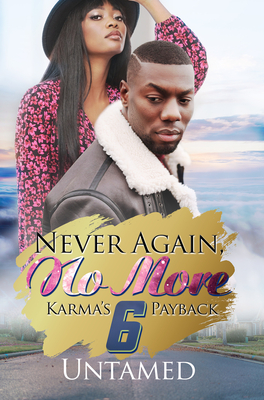 By Untamed
List Price: $15.95
Our Price: $13.56
(Save: $2.39 15%)
Usually Ships in 1-5 Days
In part 6, the final chapter of the Never Again, No More series, the lives of all the men and women are forever changed as they are forced to come to terms with the consequences of their actions. And one thing is for sure: none of them will ever be the same again.


LaMeka and Gavin have a love so pure that it could only be ordained by God, but devilish intentions lurk in the shadows, and it’s a lot closer to home than LaMeka thinks. Will the evil intentions of others be the final breaking point of their relationship?

Despite Lucinda’s ultimate betrayal, she isn’t the only one feasting on forbidden fruit. Love still brews under the surface, but will it be enough to overcome the extreme perils of their sordid love affair, or could the hurt they’ve caused one another prove to be the final straw?

Although Terrence’s life was spared, the events have changed the man that Trinity once knew and loved. For Terrence, it isn’t the circumstances that changed him; it’s Trinity’s actions. Will her decisions cause a permanent rift between these lifetime lovers?

As Charice battles her indecisiveness, Ryan and Lincoln may have sealed her fate for her. As she comes to grips with what she wants, the final decision may no longer be hers to make.

Author and poet Untamed brings about enlightenment and amusement through real-life, everyday stories with characters that resonate. This Cum Laude graduate of UMUC attributes her passion for the literary arts to her magnet school educational background. Her unique style of writing landed her awards such as Coca-Cola Young Writers Award and UBAWA’s Top 100 Authors 2018. Her creative talents afforded opportunities with SWAG Magazine, Boss Magnet Media, and a multi-book deal with Urban Books. As an expert movie quoter with a hankering for the 90s, Untamed resides in Georgia and relishes family time with her husband and children. She continues to push the creative envelope, delivering content that is unapologetically real and undeniably untamed.