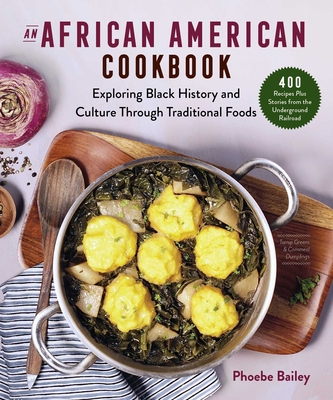 An African American Cookbook: Exploring Black History and Culture Through Traditional Foods is a bountiful collection of favorite foods and the memories that go with them. The foods reflect the ingenious, resourceful, and imaginative Africans who made them. Woven among the four hundred recipes are rich historic anecdotes and sayings. They were discovered or lived by the cookbook’s contributors, many of whose ancestors participated in the Underground Railroad or lived near where it was active. This is a cookbook rich in history and rich in easy-to-prepare, wonderfully tasty food! Recipes include:

Author Phoebe Bailey’s congregation in historic Lancaster, Pennsylvania, has a long history with Underground Railroad activity. Today they offer Underground Railroad reenactments and a buffet of traditional African American food to their many visitors. This cookbook celebrates those historic events, when this church fed and then helped to spirit enslaved Africans to safety.

Phoebe M. Bailey was born the youngest of 15 children in a family from Huntington, Long Island, New York. Phoebe has been encouraged by her father's strength and courage as a black man, and inspired by her mother's faith in God and undeniable intelligence as a black woman, to embrace herself and her African heritage. Phoebe began her career with Bethel Harambee Historical Services as a call from God. She left the corporate world to work closely with her brother, The Reverend Edward M. Bailey, and the congregation of Bethel African Methodist Episcopal Church, to preserve and tell the stories of those Africans who have been discounted and left out of traditional American history and to restore and rebuild a community of faith. She lives in Lancaster, Pennsylvania.
“This is more than a cookbook—it’s a labor of love that honors those who came before, even as we continue the tradition of soul food cooking today.” —Sisters from AARP