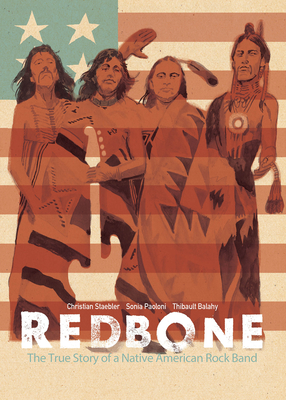 You've heard the hit song "Come and Get Your Love" in the movie Guardians of the Galaxy, but the story of the band behind it is one of cultural, political, and social importance.

Brothers Pat and Lolly Vegas were talented Native American rock musicians that took the 1960s Sunset Strip by storm. They influenced The Doors and jammed with Jimmy Hendrix before he was "Jimi," and the idea of a band made up of all Native Americans soon followed. Determined to control their creative vision and maintain their cultural identity, they eventually signed a deal with Epic Records in 1969. But as the American Indian Movement gained momentum the band took a stand, choosing pride in their ancestry over continued commercial reward.

Created in cooperation of the Vegas family, authors Christian Staebler and Sonia Paoloni with artist Thibault Balahy take painstaking steps to ensure the historical accuracy of this important and often overlooked story of America's past. Part biography and part research journalism, Redbone tells a vivid story about this neglected chapter of American history.
Diplomed from the School of Decorative Arts at the University of Strasbourg, Christian Staebler is a graphic designer and illustrator, working as a freelancer since 1991. His work includes layouts for books, magazines, industrial booklets, and packagings, while his illustration work includes client publishers like Hachette and Nathan.

In his personal works, Nature always comes first. He strives to show that each little piece of Nature contains amazing beauties. This theme comes out in his illustrations, photos, and scan-art.

"Compelling reading for fans of roots rock and Native American history in middle school and up." —School Library Journal

"Musicians with heart put their people before profits in an inspirational tale. Well-researched and well-paced, this book will introduce a new generation to the music and impact of Redbone." —Kirkus Reviews (Starred review)

"In some eyes, the guys in Redbone, still the most successful Native American rock band this country has produced, are indeed superheroes. Not all heroes wear capes, and some wear buckskin." —Houston Chronicle

"In the early sixties, Pat and his brother, Lolly, perform on the Sunset Strip, crossing paths with The Byrds, The Doors, and Jimi Hendrix, who gives the brothers the idea of forming 'an all Indian band. That'd make this country sit up.' The seed germinates and Redbone bursts forth. Staebler and Paoloni offer a lens onto aspects of the twentieth-century Native American struggle for civil rights and injustices like forced schooling and racist policing, as well as the 1968 birth of the American Indian Movement. Balahy's art is particularly splendid and well-varied in style for the complex subject matter." —Booklist

"A gorgeously illustrated slice of rock history wrapped in the secret history of this nation, Redbone is an excellent graphic novel." —Comics Bookcase