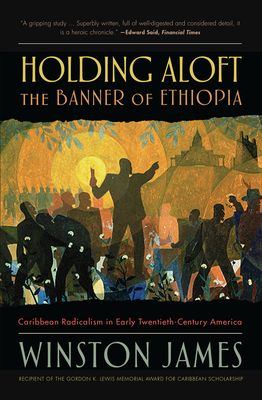 Marcus Garvey, Amy Jacques Garvey, Claude McKay, Claudia Jones, C.L.R. James, Stokely Carmichael—the roster of immigrants from the Caribbean who have had a profound impact on the development of radical politics in the United States is a long one. In this magisterial work, Winston James focuses on the twentieth century’s first wave of inspirational writers and activists from the Caribbean and their contribution to political dissidence in America.

Examining the way in which the characteristics of the societies they left shaped their perceptions of the land to which they traveled, Winston James draws sharp differences between Hispanic, Anglophone, and other non-Hispanic arrivals. He explores the interconnections between the Cuban independence struggle, Puerto Rican nationalism, Afro-American feminism, and black communism in the first turbulent decades of the twentieth century. He also provides fascinating insights into the peculiarities of Puerto Rican radicalism’s impact in New York City and recounts the remarkable story of Afro-Cuban radicalism in Florida. Virgin Islander Hubert Harrison, whom A. Philip Randolph dubbed “the father of Harlem radicalism,” is rescued from the historical shadows by James’s analysis of his pioneering contribution to Afro-America’s radical tradition. In addition to a subtle re-examination of Garvey’s Universal Negro Movement Association—including the exertions and contributions of its female members—James provides the most detailed exploration so far undertaken of Cyril Briggs and his little-known but important African Blood Brotherhood.

This diligently researched, wide ranging and sophisticated book will be welcomed by all those interested in the Caribbean and its émigrés, the Afro-American current within America’s radical tradition, and the history, politics, and culture of the African diaspora.
Winston James is the author of A Fierce Hatred of Injustice: Claude McKay’s Jamaica and His Poetry of Rebellion (2000), The Struggles of John Brown Russwurm: The Life and Writings of a Pan-Africanist Pioneer, 1799–1851 (2010) and editor with Clive Harris of Inside Babylon: The Caribbean Diaspora in Britain (1993). James won the Gordon K. Lewis Memorial Award for Caribbean Scholarship from the Caribbean Studies Association for Holding Aloft the Banner of Ethiopia. He is Professor of History at the University of California, Irvine.
“A gripping study … Superbly written, full of well-digested and considered detail, it is a heroic chronicle.”
—Edward Said, Financial Times

“A major contribution to the ‘hidden history’ of the African diaspora … richly detailed, powerful and compelling.”
—Stuart Hall, The Open University

“Winston James has written what will become an enduring classic in the history of the African diaspora … This is an enormously rich and rewarding work, lucidly written and accessible, that will be used and debated for some time to come.”
—American Historical Review

“This imposing historical work sheds a fresh light on the influence and impact of Afro-Caribbeans on the ideology of the American black left in the early twentieth century … This splendid work is at the same time the best study of Caribbean immigration to the United States during the period.”
—Michel Fabre, Revue AFRAM

“Holding Aloft the Banner of Ethiopia accomplishes all of the author’s main objectives and looks set to become the standard work on its subject for many years to come … The many new issues and debates that he introduces have totally redefined the way in which the history of Afro-Caribbean radicalism in the United States will be viewed in the future.”
—International Journal of Social History

“This is a superb book on a largely unstudied topic, revealing overlooked aspects of the Afro-Caribbean experience in the United States with subtlety, sophistication, and power.”
—Science & Society

“James’s meticulously researched study might be categorized as ‘intellectual social history,’ as it felicitously combines engaging biography with a serious consideration and close working-through of the varied theoretical and political commitments of these Caribbean radicals.”
—New West Indian Guide / Nieuwe West-Indische Gids

“This is a story that needed to be told, and it deserves a pan-African welcome.”
—Journal of Caribbean History

“An important addition to the literature on the African diaspora and the story of American radicalism.”
—Foreign Affairs