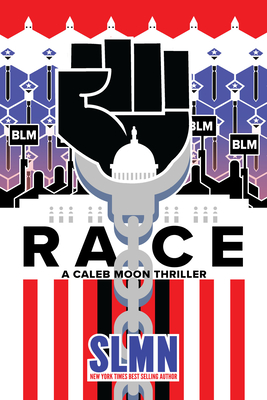 Caleb Moon is a young idealistic journalist reporting on everyday racial injustices, but when he is arrested at a police brutality protest he meets a racist white cop. The interactions indicate the lengths to which racism is systemic and pushes Caleb’s approach to injustice from theory into practice.

Convinced that journalism isn’t how he will change the world Caleb chooses to help a black candidate run for mayor against the white incumbent. The experience exposes him to the machinations of voter suppression and the lengths to which those at the top will go to maintain the status quo. These revelations drive him further underground as he has made powerful enemies.

Race is a powerful, riveting, and timely novel about one man’s quest to destroy the system from within before it destroys him.
SLMN lives off the grid. He is a ghost. There are those who want him dead. He lives a life on the move, just him and his Ducati Monster, driving from town to town. He rarely settles in one place for more than a few weeks at a time before he feels the need to move on. He doesn't own a phone, a computer or other trackable device. In one life he has fought injustice wherever he has seen it, spending several years in developing nations helping those who couldn't for whatever reason help themselves. He worked on projects to bring fresh water to areas without it, to provide sex and health education and secure vital aid in war torn regions. He has served on peace-keeping forces, campaigned against the deployment of landmines, and in the last decade devoted his life to ecological issues--most notably combating the illegal trade in endangered species. He has witnessed atrocities no man should ever see, and glimpsed the secret inner workings of the world run by the rich and powerful, making him enemies of some of the most dangerous men in the world. Never once has he walked away from a fight. In another life, SLMN has produced a number of movies and is both a New York Times and USA Today Bestselling Author.