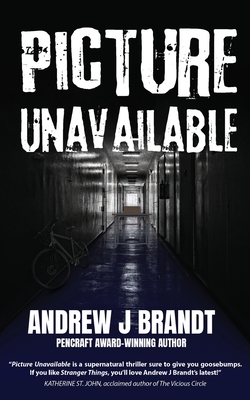 "Picture Unavailable is a supernatural thriller sure to give you goosebumps. If you like Stranger Things, you'll love Andrew J Brandt's latest " - Katherine St. John

While looking through their sixth-grade yearbooks, Charlie Greene and his two best friends notice that the portrait of their missing classmate has been left blank except for two words: Picture Unavailable.

Though Johnny Howardwick vanished mysteriously, Charlie and company know he was at Westfield Middle School for picture day. Things get stranger when they realize Johnny's image has been purged from the entire yearbook.

The boys set out to uncover the mystery to jump-start their Serial-style podcast. Their first stop is the yearbook teacher, Mr. Cotter, who knows much more than he claims. But the more they investigate, the more the boys learn that Johnny's disappearance is far from an isolated incident.

And the question soon becomes: Can they uncover their Tennessee town's dark secret in time to avoid becoming its next victim.

"Picture Unavailable encompasses the supernatural of E.T. I watched as a kid, mixed with Brandt's thriller expertise. I was instantly pulled into the vivid story he crafted." - Charles D'Amico, PenCraft Award-winning author of the Neil Baggio Suspense Series