Head Over Heels: A Novel (Paperback) 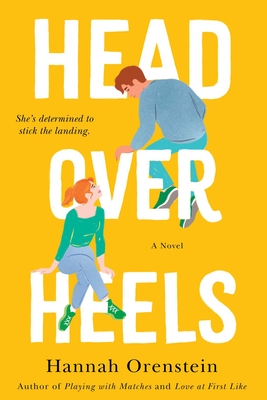 Head Over Heels: A Novel (Paperback)

From the author of the Love at First Like and Playing with Matches, an electrifying rom-com set in the high stakes world of competitive gymnastics, full of Hannah Orenstein’s signature “charm, whimsy, and giddy romantic tension” (BuzzFeed).

The past seven years have been hard on Avery Abrams: After training her entire life to make the Olympic gymnastics team, a disastrous performance ended her athletic career for good. Her best friend and teammate, Jasmine, went on to become an Olympic champion, then committed the ultimate betrayal by marrying their emotionally abusive coach, Dimitri.

Now, reeling from a breakup with her football star boyfriend, Avery returns to her Massachusetts hometown, where new coach Ryan asks her to help him train a promising young gymnast with Olympic aspirations. Despite her misgivings and worries about the memories it will evoke, Avery agrees. Back in the gym, she’s surprised to find sparks flying with Ryan. But when a shocking scandal in the gymnastics world breaks, it has shattering effects not only for the sport but also for Avery and her old friend Jasmine.

Perfect for fans of Emily Giffin and Jasmine Guillory, Head Over Heels proves that no one “writes about modern relationships with more humor or insight than Hannah Orenstein” (Dana Schwartz, author of Choose Your Own Disaster).
Hannah Orenstein is the author of Playing with Matches, Love at First Like, and Head Over Heels, and is the deputy editor of dating at Elite Daily. Previously, she was a writer and editor at Seventeen.com. She lives in Brooklyn.
“Hannah Orenstein’s Head Over Heels offers a perfect escape to an alternate 2020, one full of Olympic aspirations and encouraging pep talks.”
—PopSugar

"You can still get your competitive gymnastics fix."
—TheSkimm

"Hannah Orenstein’s third novel (you might recall Love at First Like and Playing with Matches) glitters with the same signature humor you’ve come to love."
—MarieClaire.com

"Orenstein sticks the landing with this one."
—OprahMag.com

“Head over Heels is a high-flying romantic comedy unafraid to examine the hardships of competitive gymnastics. Timely and realistic… Head Over Heels will delight anyone heartbroken over the postponement of the Tokyo 2020 Olympic Games, fans of "Stick It" and "The Bronze," and loyal readers of Lianne Moriarty, Barbara Davis, and Sophie Kinsella.”
—Booklist

"A rom-com set in the competitive gymnastics world . . . . Twisty storylines about love and relationships follow."
—MarieClaire.com

"If you’re looking for a more feel-good narrative that still deals with the tensions of modern gymnastics, Orenstein’s rom-com novel hits that mark."
—Electric Lit

"This thoughtful romance follows former gymnast Avery Adams, who gave up her Olympic dreams after a disastrous performance and is trying to figure out who the hell she is without the sport that defined her. After a nasty breakup, Avery moves back into her parents’ house, starts coaching a future all-star, and meets a man who could be something special. All Avery has to do is deal with the trauma from her gymnastics past, which is much easier said than done." —MarieClaire.com