Songs in the Shade of the Cashew and Coconut Trees: Lullabies and Nursery Rhymes from West Africa and the Caribbean (Hardcover) 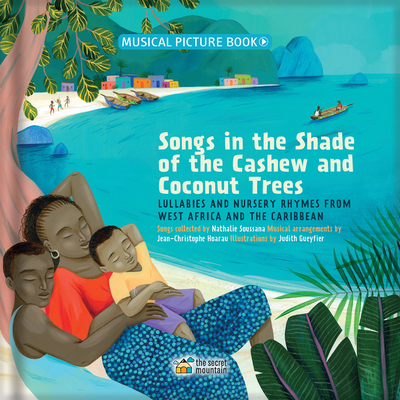 Songs about children playing in the schoolyard, sisters braiding each other’s hair at the beach, and parents dancing late into the night mesh together thanks to the music. A wide array of styles—nursery rhymes from Gabon, lullabies from Cape Verde, and rumbas from the Congo—are performed in more than a dozen languages. Luminous artwork and homegrown instruments round off this wonderful celebration of history, language, and culture. Lyrics appear in their original language and in English, along with notes on culture, a world map, and a code for song downloads and print-outs.

Nathalie Soussana has written several musicals and created the Parents’ Choice Gold Award-winning Songs from the Garden of Eden. Jean-Christophe Hoarau has worked with musicians like Richard Galliano and Georges Moustaki, and he's been awarded many times the Grand Prix Charles-Cros in France. Julie Gueyfier, a graduate of the Duperré School in Paris, has illustrated several picture books.

"A chorus of drums, woodwinds, strings, creoles and indigenous languages will delight the ears at bedtime." —Kirkus Reviews, Starred Review

"For this small-size picture book, musical artist Soussana compiles treasured nursery rhymes and lullabies from Caribbean and West African countries. Spreads evoke a sense of place with the title, provenance, and line or two of each song: “ ‘Gongon’/ Cape Verde/ “To help me sleep, my grandmother tells the story/ of the lovesick mermaid and her fisherman.” In corresponding illustrations, Gueyfier’s vibrant use of color is transportive, placing readers at an evening dance party in Cameroon or near the turquoise waters of Trinidad and Tobago. The book’s latter half includes a map, full lyrics (in both English and the language of origin), as well as information about cultural practices, varying languages and dialects, and the songs’ musical and poetic heritage. Accompanying music is included via CD and available for download. A striking and wholehearted celebration of music and heritage."—Publishers Weekly