How We Got Over: Growing up in the Segregated South 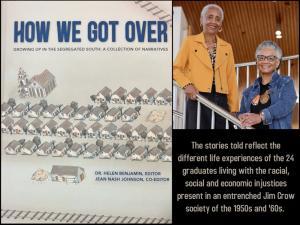 The Book: How We Got Over: Growing up in the Segregated South

Through 24 narratives, How We Got Over captures Black life in compelling first-person accounts from childhood and teen years in mid-twentieth century Alexandria, Louisiana, a town with nearly twice as many enslaved people as whites in 1860. The stories reflect the impact of slavery and the resulting segregation on the contributors' lives through their unfiltered accounts of racial, social, and economic inequities, injustices, and challenges in the 1950s and 1960s. From the trauma of witnessing a lynched body hanging from a tree at the nearby community center to finding delight in discovering a hidden talent in middle school, the contributors share how they survived and thrived despite the obstacles and challenges they encountered. The narratives are written by 24 graduates of the Peabody High School Class of 1968 now in their early 70s: Rosa Ashby, Helen Benjamin, JoAnn Williams, Rose Dempsey, Winnifred Edwards Jett, Elaine Ford, Provost, Sherman Fulton, Kathlyn Giles Stewart, James Goff, Phyllis Hamilton Venable, Joseph Jett, Michael Johnson, Dr. Willie James Johnson, Rev. Ameal Jones, Emma Jones Gray, Pearlie Mae Lewis Carter, Michael Milton, Roderick Newman, Doretha Perry Wyatt, Freddie Price Sr., Gloria Roberts, Rev. Larry Smith, Dr. Linda Smith Green, and Aubrey Woodley.

A retired community college educator, Helen Benjamin, serves as president of HSV Consulting, Inc., working with dozens of colleges, boards, and CEOs to advance student-centered organizational and leadership improvement. A native of Alexandria, LA, she looks back with pride and appreciation for the life-altering education and support she received from Peabody High School. Upon her graduation in 1968, she enrolled at Bishop College in Dallas, TX and 22 years later moved to California seeking opportunities to apply the educational abilities and leadership skills she acquired and honed in the South. She worked in the Contra Costa Community College District in the San Francisco Bay Area for 26 years in several positions, including serving as president of two of the colleges, retiring in 2016 as chancellor of the District.

Jean Nash Johnson’s award-winning journalism career as a daily newspaper features writer, news and features editor and columnist spans almost three decades. With her Southern Black upbringing firmly rooted and an eye for culture, trends and lifestyles issues, Jean sought after unforeseen storylines and untold angles with a keen understanding of communities of color. She began first in Houston out of college as a cub reporter for The Houston Chronicle, and ultimately as a veteran staffer for The Dallas Morning News. After retiring from daily news life, Jean turned to life in her North Texas community. As volunteer, she helped form and sponsor an afterschool campus writing club and annual writing contest at her neighborhood Title I middle school, inspiring a new generation of wordsmiths.

How We Got Over: Growing up in the Segregated South (Hardcover)